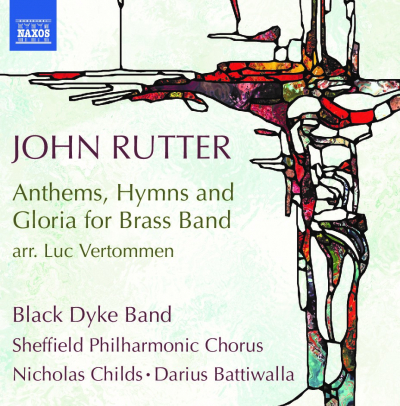 Arranged by Luc Vertommen for choir and brass band [13]–[15]

John Rutter was born in London and educated at Highgate School in North London. As a young boy soprano he took part in the first recording of Benjamin Britten’s War Requiem under the composer’s baton in 1963. Rutter began to develop speedily into the multi-faced composer of international repute that he is today.

He then read music at Clare College, Cambridge, where he was a member of the choir and served as director of music from 1975 to 1979. Rutter had tutorial responsibility for the undergraduates coupled with the daily running of the chapel choir. The choir was one of the first in Cambridge to mix male and female voices. Rutter started the choir’s rise to international fame.

In 1981 Rutter founded his own choir, the Cambridge Singers, which he conducts and with which he has made many recordings (including of his own works). John Rutter resides at Hemingford Abbots in Cambridgeshire and frequently conducts choirs and orchestras around the world. In 1980, he was made an honorary Fellow of Westminster Choir College, Princeton, and in 1988 a Fellow of The Guild of Church Musicians. In 1996, the Archbishop of Canterbury conferred a Lambeth Doctorate of Music upon him in recognition of his contribution to church music. Rutter worked as an arranger and editor and collaborated with Sir David Willcocks on the successful Carols for Choirs anthology series.

Rutter’s music is eclectic and shows influences of the French and English choral traditions of the early-20th century as well as influences from light music and American classic songwriting. Almost every choral anthem and hymn has an orchestral accompaniment in addition to the standard organ or piano accompaniment.

Church music played a significant and cherished part in John Rutter’s life; first as a boy soprano in his school chapel choir, then as teenage organist, and much later as director of the chapel choir at Clare College, Cambridge. Most of his sacred music has been written in response to commissions and primarily intended for use in the context of a church service. Rutter scored some of this music also for orchestra in a more colourful form.

Gloria, a concert work, despite the use of a religious text, in fact marks the occasion of Rutter’s very first engagement in the United States. The work was commissioned by The Voices of Mel Olsen in Omaha, Nebraska, who invited Rutter to direct the first performance on 5 May 1974. The words come from the second section (the Hymn of Praise) of the Ordinary of the Mass, which in the liturgy follows the Kyrie. The familiar opening words are those of the angels proclaiming the birth of Jesus, as found in the second chapter of the Gospel of Luke. Rutter’s setting is based largely on one of the Gregorian chants with which the text is associated. He describes the three movements as ‘…roughly corresponding to traditional symphonic structure’, the mood of the sections being respectively ‘… exalted, devotional and jubilant by turns’. The use of organ, brass and percussion makes for plenty of joyful noise unto the Lord in the outer movements and yet also for a hauntingly ethereal, softly and introspective middle section. Rutter had his first great international success with this vivaciously exhilarating work in 1974.

A decade later this amazing feat would be achieved again in a composition that remains one of the most popular works in the repertoire. The Requiem (1985) was composed in memory of John Rutter’s father, who died the previous year. The Pie Jesu for soprano solo is a personal prayer to Christ and one of the seven section of the work to form an arch-like meditation on themes of life and death.

Rutter’s years as director of music at Clare College, Cambridge, from 1975 to 1979 inevitably inspired plenty of music. Clare College has remained close to Rutter’s heart in the years since 1979, and he has offered further gifts of music. Two works designed to provide a contemplative mood in which to end chapel services can be found here. Go Forth into the World in Peace (1988) was written for the choir of Clare College and their director of music Timothy Brown to take on a tour of the US in the 1980s. The brief, tender A Clare Benediction was written in 1998. This choral blessing was named in honour of his alma mater, Clare College, Cambridge.

Friendship pure and simple is one key inspiration for John Rutter’s music. As the Bridegroom to His Chosen was written for the wedding of Jeremy Taylor and Mary Mure, two members of Rutter’s own Cambridge Singers. There are few better examples of the classic Rutter talent for writing gracious, melting melodies that caress the mind for days.

What Sweeter Music was written especially for King’s College Choir in 1987.

The Lord Bless You and Keep You was written in 1981 in memory of Edward Chapman, sometime director of music at Highgate School in London.

Distant Land was originally written in 1991 as a choral piece (subtitled A Prayer for Freedom) inspired by the release of Nelson Mandela from prison. John Rutter was encouraged to make an orchestral version of it by Mark Wilkinson at Universal Classics, who suggested that a number of his shorter choral pieces with orchestra might work in a purely orchestral form.

John Rutter’s anthems All Things Bright and Beautiful and For the Beauty of the Earth for mixed voices are short sacred choral works in the tradition of the Anglican church music. The choral song This is the Day was composed for the wedding of HRH Prince William and Miss Catherine Middleton and first performed in Westminster Abbey on 29 April 2011.

All Creatures of our God and King was written for Simon Lindley and the boys of St Albans School, and Now thank we all our God was written in 1974 for John W.R. Taylor and the Staffordshire County Youth Choir and Orchestra. Both were published as 2 Hymns of Praise (with introductory fanfares).

Product successfully added to your cart.